During July 2013 I packed my bags and hitch-hiked around Ireland on a ‘Hitching For Hope’ listening tour where I recorded people’s voices, visions, hopes and dreams. I had countless conversations, took in 17 counties, did 28 radio interviews, and met people from all walks of life. These included islanders on Inishbofin, farmers in Connemara, pilgrims on Croagh Patrick, orange men in Derry, soldiers at the national day of commemoration, business people and students in Dublin, activists in Wicklow, community workers in Moyross, monks in Glenstal Abbey and historians on the Hill of Tara. The whirlwind trip ended on the Hill of Tara just before I had to return to Dublin for a Council of State meeting at the Áras that the President convened. I then travelled to Glenties, Co. Donegal where I did a presentation at the MacGill Summer School, followed by a return to Dublin and an interview on the Marian Finucane show on RTE Radio One. The trip was a complete leap of faith as I had no income coming in and no money to pay my July rent but support came flooding in via online donations and the goodwill and generosity of the nation lifted me to make it all possible.

I’m currently doing talks and media interviews about the experience and planning a book. I am hoping to find a sponsor/s or patron to help support me for a few months while I write it. (Email ruairi@community.ie )

You can find out more about the tour via the below links, the blog, and the Facebook page.

A huge thanks to everyone who supported the project. I am really grateful for your help.


The idea for the trip came after I was asked to speak at the MacGill Summer School on the theme of citizens’ views of the republic.

While it was a great honour to be asked to speak at this event, my initial inclination was to decline because I didn’t feel qualified to talk without first connecting deeper into people’s dreams for Ireland.

This gave rise to idea of a listening tour born out of a heartfelt sense that there are great people, organisations and communities out there that aren’t being heard in the media or in politics. 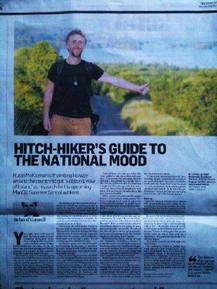 And to others who have been helping out along the way including those have given me lifts, stories, food and encouragement. Thanks also Alice Kennelly, Clare Herbert, Muireannn De Barra, David Patterson, Ross, Lydia Campbell Kiernan, Breffni Clarke, Caitriona Quirke, Mark Patterson, Paul and James in Aughrim, Caroline Crowley, Joe and the lads near Dunmore East, Kurt and housemates in Cork, Damien Mulley, Allen Meagher, Jennifer and crew at Limerick Learning Hub, Eoin Ward and Martin McBennet, Marty and Justin at Uisneach Hidden Ireland tours in Mullingar,  and others I”m forgetting to mention. You are all brilliant! And so too my wonderful fiancé for her love and support – Susan Quirke/Susie Q.

Media coverage
Thanks to TV3 Morning Show who interviewed me, to the Irish Timesand TheJournal.ie who who did features, the Irish Independent who published my article, and to the Derry Journal, Sunday Times, Galway Independent, Cork Independent, Cork Evening Echo, the Tipp Tatler, the Impartial Reporter (Fermanagh), the Donegal Democrat, the Anglo Celt. Thanks also to WorldIrish.com, DonegalDaily.com and other websites who covered the trip.

Thanks also to the radio stations who I did 28 interviews with:


‘There is no passion to be found playing small – in settling for a life that is less than the one you are capable of living.’ - Nelson Mandela

You have successfully joined the subscriber list. Please consider checking out my latest Love and Courage podcast episode and connecting via social media links below.